Matthew 1:18-25—Now the birth of Jesus Christ took place in this way.

When his mother Mary had been betrothed to Joseph, before they came together she was found to be with child from the Holy Spirit. 19 And her husband Joseph, being a just man and unwilling to put her to shame, resolved to divorce her quietly. 20 But as he considered these things, behold, an angel of the Lord appeared to him in a dream, saying, “Joseph, son of David, do not fear to take Mary as your wife, for that which is conceived in her is from the Holy Spirit. 21 She will bear a son, and you shall call his name Jesus, for he will save his people from their sins.” 22 All this took place to fulfill what the Lord had spoken by the prophet:

23 “Behold, the virgin shall conceive and bear a son,
and they shall call his name Immanuel”

(which means, God with us).

24 When Joseph woke from sleep, he did as the angel of the Lord commanded him: he took his wife, 25 but knew her not until she had given birth to a son. And he called his name Jesus.

In the name of Jesus. Amen.

Our Gospel lesson today is a Genesis story. It is the story of the beginning of Jesus Christ. In fact, Matthew uses the word genesis; he literally writes, “the genesis of Jesus Christ took place in this way.”

The story told in Genesis 1-4 is very different from the genesis of Jesus. 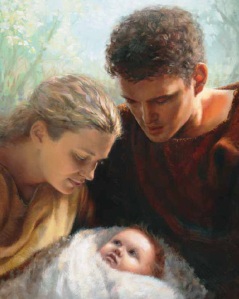 Because they fell for Satan’s lie, sin came. Sin brought death. And ‘the rest is history’ as we say. The rest is a tragic, death-filled history.

Into the mess of humanity, God comes to live among His creation. God initiates restoring His relationship with a sinful, fallen humanity. God descends to be with us.

Our text is the genesis, the beginning, of Jesus told from Joseph’s perspective. In typical male fashion, the birth of Jesus is told briefly and simply. In fact, it is mentioned so fast you could easily miss the fact that Jesus is born in the last verse of the text.

Joseph is engaged to Mary. Now, engagements worked differently in those days. An engagement was legally binding and could only be broken by death or divorce. But the couple did not actually came together as husband and wife until the marriage took place.

So, when Mary tells Joseph that she is pregnant, imagine the bombshell that was. Joseph knows how babies are made. Human babies have human fathers. He knows that Mary is not pregnant with his baby. The only logical conclusion is that Mary has been an unfaithful fiancé and is an adulteress.

But Mary knows what is going on – the angel Gabriel told her (Lk. 1:26-37). Now, Mary tries to reassure Joseph, “I’m pregnant, but it’s not what you think. This is God’s child. And I am still a virgin.” That would be a tough pill to swallow – so tough, in fact, that it is impossible.

The carpenter Joseph knows the commandments. Through Moses, God had given laws for when the sin adultery took place. “If a man commits adultery with the wife of his neighbor, both the adulterer and the adulteress shall surely be put to death” (Lev. 20:10). That sounds pretty foreign in our promiscuous society.

Joseph is a just man. Just men keep God’s just law. To take Mary as his wife would mean that society would see Joseph as guilty by association of fathering a child outside of the marriage bed.

Yet, Joseph is a gracious man. He is ‘unwilling to put Mary to shame.’ He doesn’t want to put Mary in the place where she would be publicly labeled as an adulteress.

So what is a just and gracious man to do? Does he give law or grace?

God intervenes. God sends His angel to speak to Joseph, “Joseph, son of David, do not fear to take Mary as your wife, for that which is conceived in her is from the Holy Spirit. She will bear a son, and you shall call his name Jesus, for he will save his people from their sins.”

Joseph does as the angel commands him. He takes the shame of Mary’s pregnancy upon himself and makes her his wife. Mary gives birth, and Joseph calls His name Jesus.

Emmanuel – God with us.

God begins again. God proves that He loves creation by getting mixed up in mankind’s mess.

In Jesus, justice and grace meet. God’s wrath against your sins and the sins of all humanity are spent and poured out on Christ. On the person of Jesus, your sin is punished.

God is with you to give you undeserved grace. Jesus took your suffering; Christ took your shame. God is unwilling to put you to shame, but He does not plan to put you away in secret. No, God does not work that way. He openly puts Jesus on the cross, the Just for the unjust.

All of this is done to give you a new beginning, a new genesis. God restores the relationship that you by your many and manifest sins have broken.

I said earlier that the Genesis of Jesus is very different from Genesis 1-4. It is different because it is the  same story, but in reverse. In Gen. 1-4, all humanity in Adam and Eve moves from perfection to sin, but the Genesis of Jesus, the New Adam (1 Cor. 15:45), humanity moves from sin to perfection. 1 Cor. 15:22 says, “For as in Adam all die, so also in Christ shall all be made alive.”

When you were dead in your sins, at the right time, Christ died for you. Though you have been adulterous toward God, He gives you a new and perfect beginning. Jesus takes your sins. Now, believer, you stand on God’s holy mountain. For God has given you clean hands and a pure heart.

Now, whenever you hear the name Jesus, remember that God has come into your mess to be with you and save you from your sins. Through Jesus, the Son of David according to the flesh, God has given you grace.

God has bound Himself up with you and all creation to save you from your sins. Amen.

May the peace of God which surpasses all understanding guard your hearts and minds in Christ Jesus, now and forever. Amen.